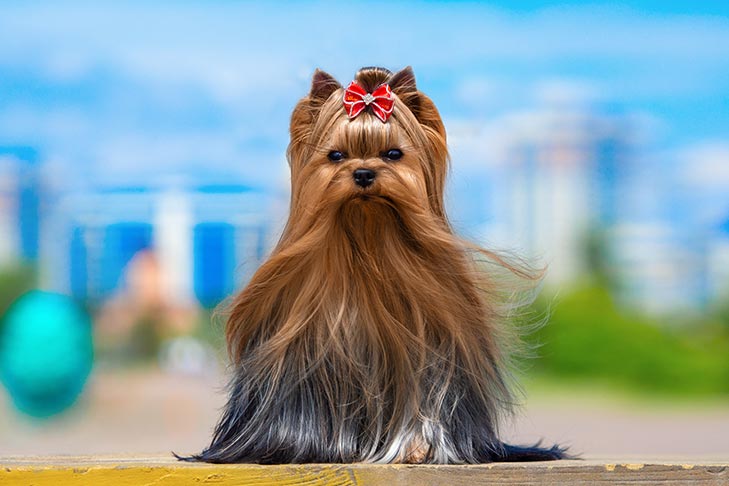 Great Britain has provided us with a varied and often noisy family of dogs, called the terriers. The word "terrier" derives from the word "terra," meaning Earth, which is an apt name for this scrappy bunch of pups who are born and bred to go to the ground to battle critters that are far better equipped to defend themselves tooth and nail than these seemingly docile pups.

Today, we think of terriers less like hunting dogs and more like lapdogs. However, at least one line of this furry family got a century's head start on the life of luxury and became the object of Victorian ladies affections and earned a prime place on their laps and in their hearts. The Yorkshire Terrier, as its name says quite clearly states, is associated with the County of York in northern England. This is the very same place that provided the stormy moors we associate with "Wuthering Heights," and alternatively the sprawling, dramatic grounds of great houses akin to "Downton Abbey."

However, the breed's roots extend farther to the north, settling in rugged Scotland. For centuries, Scotland was home exclusively to the Skye Terrier, named for the weathered, heather-covered island off the Scottish west coast. The Skye, now a rare breed, has a low, elongated silhouette and a distinctively hard and long coat that is never patterned. Centuries ago, however, there was a more compact, smaller version of the Skye, named the Clydesdale Terrier. Compared to the Skye's wiry outer coat, the Clydesdale Terrier had a soft, silky coat that had distinctive blue and tan colors. This feature is imperative to the Yorkshire Terrier of today. Although the Clydesdale was about half the weight of a modern Skye Terrier, the Clydesdale was still too big to be considered part of the Toy dog group. Another problem was that the Clydesdale hadn't completely lost its hunting instincts. However, the Clydesdale evolved into a show dog during the 19th Century and was shown standing on a box so everyone could admire the length of its coat. 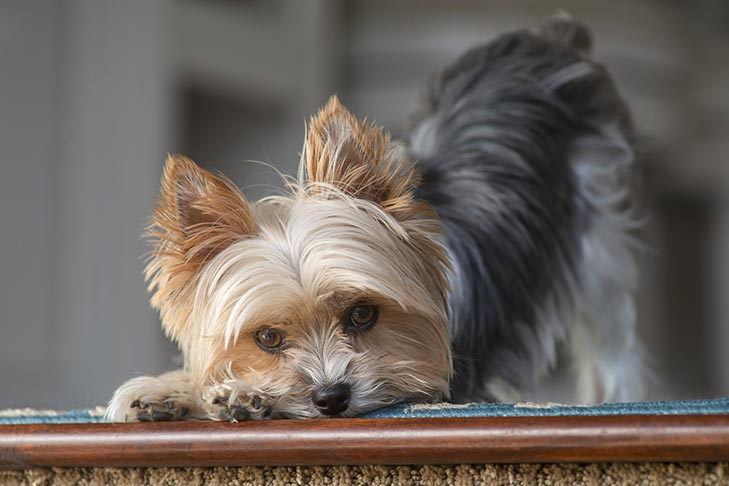 The Clydesdale Terrier was sometimes presented as a variety of the Skye terrier. Still, the breed's popularity was sabotaged by Skye fanciers, who became tired of losing to these soft-coated upstarts at dog shows. The coat's length was valued in both breeds, but the Skye fanciers insisted the Clydesdale's soft coat was unsuitable for the Scottish climate and likely resulted from cross-breeding. Eventually, the Clydesdale Terrier went extinct, but not before it paved the way for the Yorkshire Terrier.

When the Industrial Revolution changed the way textiles had been made for generations in the middle of the 19th Century, Scottish weavers migrated to Yorkshire and brought their terriers with them. Once there, the Scottish pups were bred with local dogs, particularly the Old English Terrier and the Waterside, or Otter Terrier. While these small terriers were unquestionably a lap-warming distraction to the textile workers, their hunting skills were also helpful and put to good use in the house as well as in the textile mills where their humans worked. 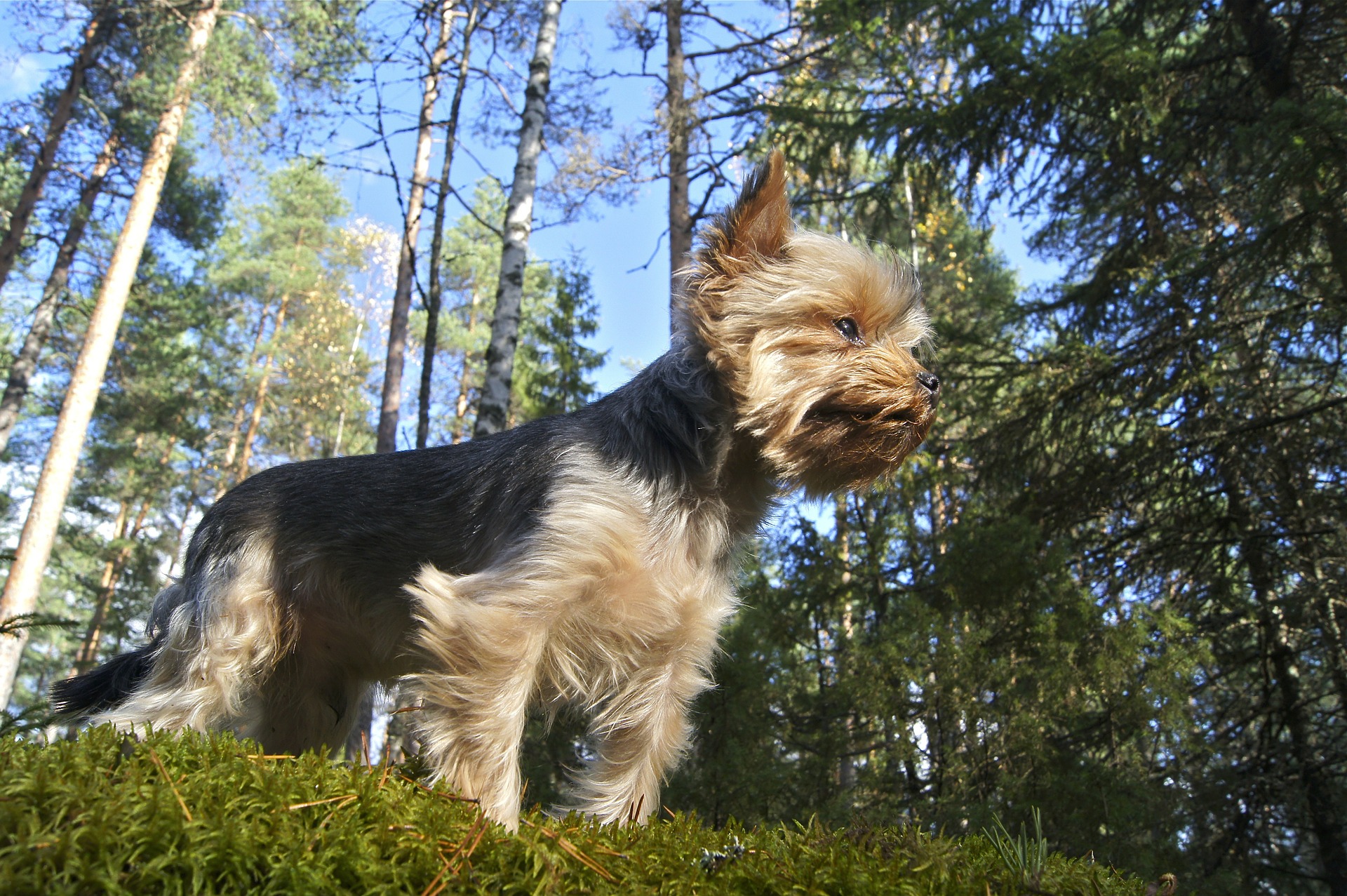 Originally known and shown as the Toy Terrier or Broken Haired Scotch Terrier, this capable little hunter was soon back in the show rings, where it was admired for its luxurious coat, like its Clydesdale forefathers. Exhibitors would put "boots" of chamois leather or linen on their dogs' rear legs to prevent them from damaging their coat, and the hair on the head was tied in a topknot. The dogs became so popular in and beyond Yorkshire by the 1870s, they earned the name Yorkshire Terrier, and their Scottish roots were forgotten.

If one dog is responsible for assuring the Yorkshire Terrier's existence as we know it today, it is Huddersfield Ben, who was born in 1865 in the town that gave him his name. Although Ben was supposedly on the large side, reportedly 11 pounds, he consistently produced offspring that weighed half that. Ben was a favorite in the show ring, excelled at rat-baiting competitions, and became enormously popular as a stud dog, which ensured that his genes have come down to nearly every Yorkie alive today. 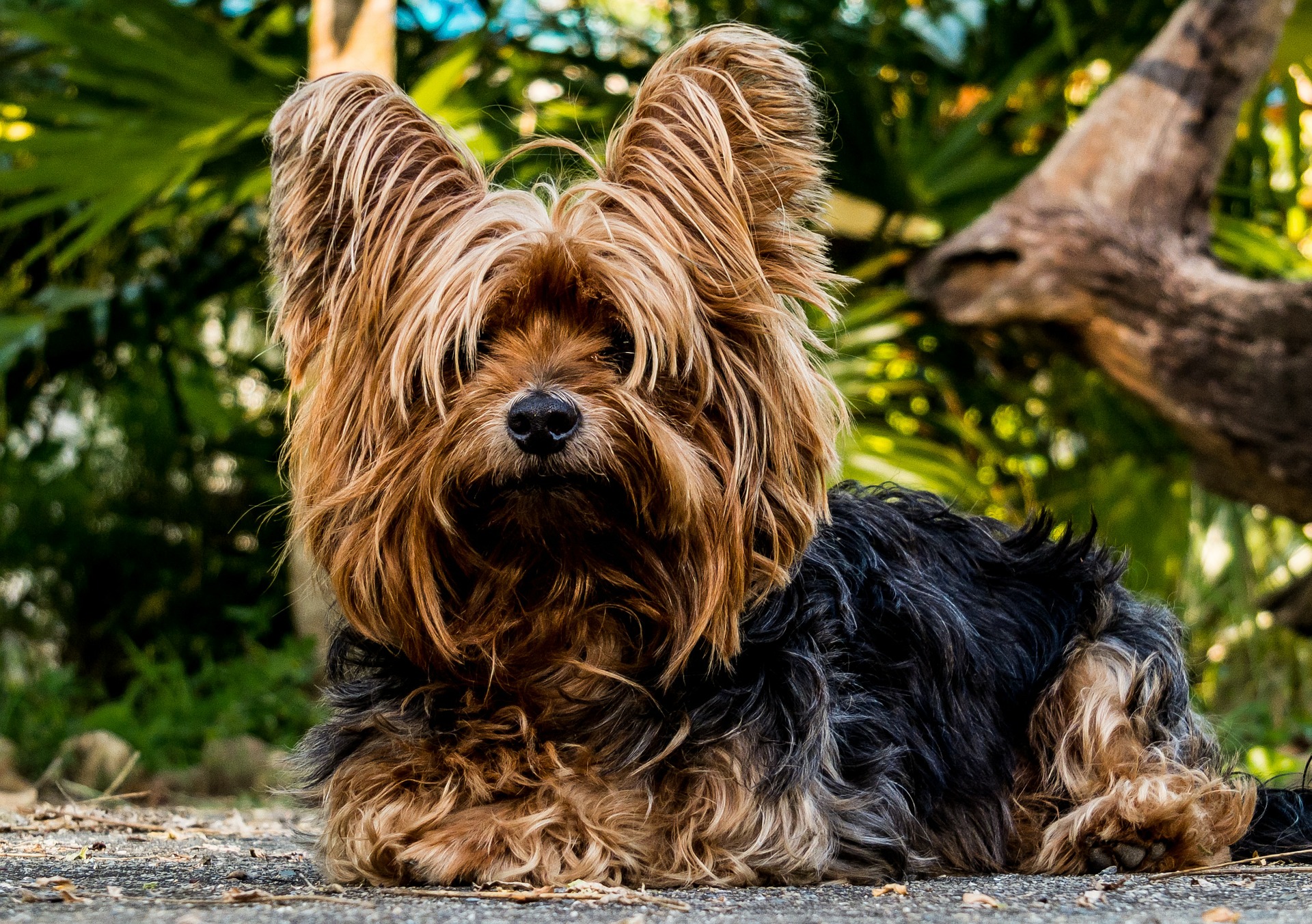 Soon, the Yorkshire Terrier traveled to America, where upper-class Victorian ladies became enamored by the pup's confident manner and charm. However, by the 1940s, the breed fell out of favor, presumably due to its grooming demands in a wartime-distracted America. However, the breed's popularity was rekindled by a 4-pound Yorkie named Smoky that was found in a foxhole in the jungle of New Guinea. Smoky was accompanied an American soldier on his combat flights. Smoky was a remarkable pup; she ran telegraph wire through narrow pipes to help build a critical airbase, warned of incoming shells, and survived 150 air raids. Smoky's missions made headlines even postwar: She was the first documented therapy dog and spent the rest of her life cheering patients at veterans' hospitals with her endless stream of tricks, which included walking a tightrope blindfolded.

Today, the Yorkshire Terrier has come full circle, distinguishing itself from its terrier brethren anew for its ability to warm laps – not dispatch rats.